Earlier this week over at AltSearchEngines the title of alternative search engine of the year was awarded to Quintura. Strictly speaking it doesn’t seem to be a search engine in its own right but rather a search interface, and that’s where its value lies.

Quintura is of Russian origin, and it makes use of that design feature beloved of Web 2.0 bloggers – the cloud. But instead of the static and to my mind fairly pointless version we’re used to seeing, it uses the cloud idea in a dynamic way, interfacing it with the search box via some fairly heavyweight artificial intelligence algorithms. It currently uses a Yahoo xml feed for its main web and image search, plus Blinx for video search and there is also an Amazon search facility, but from the description of the associated desktop search it looks as if it can work with others too. They have a Russian language version which works with Yandex results. 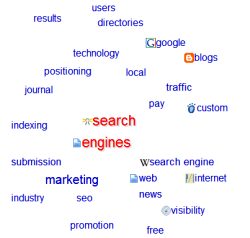 Basically you enter an initial search as normal and the usual results list appears in the right half of the screen. On the left (or optionally above if you reposition it from the settings menu) the cloud appears with your initial search terms in bold red in the centre. Around it are clustered some other related terms and if you hover over one of them that word is temporarily added to your base search phrase (you’ll see this happen in the search input box) and the search results update accordingly; as does the cloud. Hover over another word and that one replaces the first addition, while if you click on it the word is added to the search query as a persistent addition so you can then refine further without losing it. Hovering over a word also causes a red x to appear beside it and by clicking the x you can exclude that word in the same way as using a minus sign would in the search box. Double-click in a blank area of the cloud and a text box appears so you can add a word that doesn’t appear in the cloud.

All this takes longer to describe than to do – once you get used to using the cloud you find it’s a fast way of refining results without taking your hand off the mouse.

Because the cloud interface is so intuitive for children there is a separate childrens version and the founders of the company are apparently planning a version specifically aimed at mothers.

Although the cloud interface takes up a fair bit of screen space, given that most search results leave a lot of white space anyway it is less intrusive than you might expect, and all in all this seems like a useful progression in search interface design and it’s one I’ll be investigating further.

I certainly find it more useful than the various attempts at ‘universal search’ that we’ve seen so far – most of those seem to get in the way of seeing normal results by cluttering the space up with other media or somewhat doubtful local results. Quintura’s beauty is that, like all the best ideas, it is essentially simple in operation for the user. At the moment it’s still sporting a Beta tag so I look forward to seeing whatever future developments they can come up with.